Don’t Ever Let Your Catchers Frame a Pitch

I suspect the title of this article might have got your attention. It would seem that I am advocating having catchers stop doing something that catchers have always been told and taught to do.

Actually I am advocating having them use proper receiving techniques, and avoid some of the techniques that have become common place in catching over the years that do not increase the number of strikes called.

I advocate using techniques that keep strikes looking like strikes. I see so many students come for instruction with the idea that “Framing” is a technique that will fool an umpire into thinking a pitch that is a ball is really a strike. I ask all new students what they believe framing does, and that is almost always their answer, regardless of the age of the catcher. This technique is widely used and I believe actually contributes to close strikes being called as balls.

I will explain my position on “Framing” by explaining the 4 Laws of Good Receiving that I teach all my students. I explain to my students that they need to go behind the plate with these 4 laws firmly imbedded in their technique to be the best receivers they can be.

I ask all new students this question. “How big is home plate??”
I will get all sorts of answers from possible dimensions; to the size I (the catcher) make it look. I guide their thinking to end up with the conclusion that the umpire decides how wide the plate is, the umpire decides how big the strike zone is. It is their job as a good receiver to figure out quickly how the umpire sees the strike zone and how he/she is calling the pitches. It is then their job to work with their pitcher to see that as many pitches as possible are in that zone, understanding full well that sometimes the correct place to put a pitch in certain situations in the count is low and away or maybe even in the dirt.
Law #2
“It’s a Catcher’s Job to Keep Strikes Looking Like Strikes”

This is where my teaching tends to go against the flow a little. I do not want to see my catchers catching a pitch that clearly is a ball and pulling, pushing, or somehow moving the glove to try and reposition the pitch at a spot they feel will get them a strike call. I don’t want them trying to “Make a ball look like a strike.” The best way to keep a strike looking like a strike is to never do anything that would make it look like a ball. The next 2 Laws discuss ways to accomplish that.

My goal for my catchers is that their movements behind the plate when they receive are smooth, “quiet”, and not hurried.

This is accomplished as follows.

“The Glove Never Moves After the Ball Hits It”

One of the main techniques that many players think is part of good receiving is moving the glove after the ball hits it to a spot that will more likely get them the strike call. I have always felt that most of this technique is insulting to the umpire. He can hear the ball hit the glove, so what’s the point to drag or pull the ball somewhere it wasn’t? I teach that if the technique I have described above is employed then you will maximize your strike calls and build a better relationship with the umpire by not trying to move a pitch after it hits the glove.
In conclusion: I don’t teach framing. I teach good, sound receiving. Just be concerned with keeping strikes looking like strikes and you will succeed as a catcher. 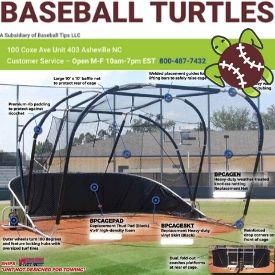